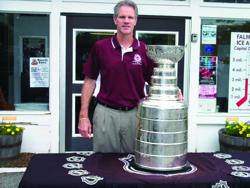 Hockey is a game of small victories.  While there are big wins and brilliant  seasons, every successful game  and practice is punctuated by small  victories. Whether it’s connecting  with a teammate on a tape-to-tape  pass, roofing a game-winner in  traffic, or simply managing to  navigate a lane of cones without  losing the puck, these are the little  triumphs that have so many of us coming back for more.

And, so often, we come back for more because we want to get something a little more right than we did the week before.

Was that pass in someone’s skates? Did you miss the net with the game on your stick? Maybe you lost the puck among the cones. Next week, or next month, or next year, we seek to make something magical happen out of our own hard work.

That’s why we set goals.

“If you set goals, it gives an understanding not just for the players, whether they’re 8U, 14U, 16U or 18U, everybody understands what the expectations are,” says USA Hockey’s Massachusetts District Coach-in-Chief Paul Moore. And that “everybody” includes more than just the players.

Having parents in the loop can be just as much for setting standards as setting expectations.

“Halfway through the season, [if] a parent wants to complain about a kid not being on the power play, you're on good footing to say there was nothing in my parent meeting or my set of goals for this team that we would be talking about who's on the power play.”

This gets into the realm of what makes for realistic goals. An 8-year-old likely shouldn’t be burdened by thoughts of what to do on a power play.

“Obviously, at the younger ages, [goals] are not too lofty,” Moore says, pointing out that a 8U player shouldn’t be burdened by much of anything.

“At 8U, I talk to my parents and guarantee one thing: Your kid is going to have fun. Every time [he or she] leaves this rink, they’re going to leave with a smile.”

Still, there is room for specifics.

“For young kids, it might be setting goals to work on your edges, to work on crossing over – simple, basic skills,” says Moore. “That evolves into your stride. Then you're progressing into stickhandling and shooting. And nowhere in most peoples’ goals will there be anything about winning. And there shouldn't be. I think that's the best message we can send our coaching fraternity.”

Moore, who starred for the Falmouth Clippers in high school before moving on to a playing career that included college hockey, the IHL and a training camp tryout with the New York Rangers, sits on Falmouth Youth Hockey League’s Board of Directors, and he’s coached up and down the age spectrum. He has for some time believed in developing players with realistic goals.

“Setting too lofty a goal on any particular team is always dangerous because it gets frustrating as a player,” he says. “And also for a coach if his expectations are too high. That's the art of coaching, setting realistic goals for the team you have. If you overreach, it can be very frustrating.”

At that point, age-appropriateness becomes key. And this has less to do a birth year and more to do with the skills that the individuals on a team have acquired.

“You have to look at your team and that's how you'll set your goal,” Moore says. “You might have a team that can’t make a tape-to-tape pass, so what good is working on a breakout? We tell our coaches to look at your team, and don’t paint them with a broad brush or put them in a box. You’re also dealing with kids who learn differently. Some kids are verbal, some kids are visual, and you need to know that. A coach is an educator, and a rink is an extension of the classroom. That’s what we preach. And when you take that approach, it benefits the individual player.”

Benefitting the individual also plays into the American Development Model. The ADM, as it’s known, is USA Hockey’s initiative that, in its own words, “places a heightened emphasis on skill development and long-term athlete development principles,” to keep kids playing and developing in the sport from the first time they step on the ice through the age of 18.

At the younger ages, the ADM’s focus is on small-area games and station-based practices, both of which Moore has run for years. It is part revolution and part evolution.

“We're obligated as coaches to keep the game fun and keep the kids engaged,” says Moore. “You don’t do it by punishing them, skating them. That’s old-school. It won’t work. You won't be successful. Successful isn't about how many games you won. It’s about retention and how many kids you're keeping in the game. If you keep the game fun an engaging for the kids, they’ll come back. That’s the ultimate judge of the job you did.”

And perhaps the most important of any list of realistic goals.

It's skating, shooting and passing. But it’s mostly about skating. If you can’t skate, you can’t play the game. The rest of the stuff comes. At 8U, you can talk about stationary passing at 15 feet, and progressing to going around a cone and making a pass out of a corner. What's the progression from stationary stickhandling? Start moving your feet.

When you implement the ADM, the small-area games, they're getting all the other stuff. They just don't know it. That's where you see the magic happens.

Let the game be the teacher. Sometimes, we need to get out of the way.

There's not a lot of structure to those games. There shouldn’t be. Offsides? Systems? It doesn't matter at 8U. Let them go. Let them fall down. Let them get back up.

For a 10U team, it might be learning how to break out of our own end. You may simplify it down to working on tape-to-tape passes in our own end. If you can't pass, you can't execute a breakout.

[Practice] doesn’t need to be sophisticated and fancy and so difficult. But the adult coaches sometimes may not have that perspective. I've had coaches come up to me, 10U coaches, who say they want to work on a power play. Power play? The kids can’t even pass.

I think we're talking about lifting the puck, maybe saucer passes. You always want to get kids out of their comfort zone. A 12U kid might be fine on breakaways or going around cones without confrontation. So what do you do? Provide confrontation. Throw a forechecker at [him or her].

Every kid has something to work on. If you have a 12U team, you might have kids who don’t skate very well.

At 8U you might have kids standing in a row and passing [from a stationary position]. But it's going to look different at 10U or 12U. They're going to be moving their feet and adding progression. It's repetition.

Now we’re talking about body contact. [With small-area games of the ADM,] there's more contact, casual contact in competition. That helps accelerate development. Time and space are the two most valuable things in our sport, and that's what the opponent is trying to take away. We're simulating that environment at 8U.

No matter what, remember to write down your goals, both as an individual and as a team. Keep coming back to those goals and adjust if needed. Keep working hard, and most importantly, have fun!

The Taos Youth & Family Center will be closed on Monday in honor of Martin Luther King, Jr. Day.  No Hockey, rec skate, or anything at the rink that day.

Sorry if this is an inconvenience.

The Taos Youth & Family Center Ice Rink will be closed on Monday, November 7, 2016.  Kids that are typically dropped off after school will still have access to the facility, but not the Ice Arena.  There will be no practices on this day.